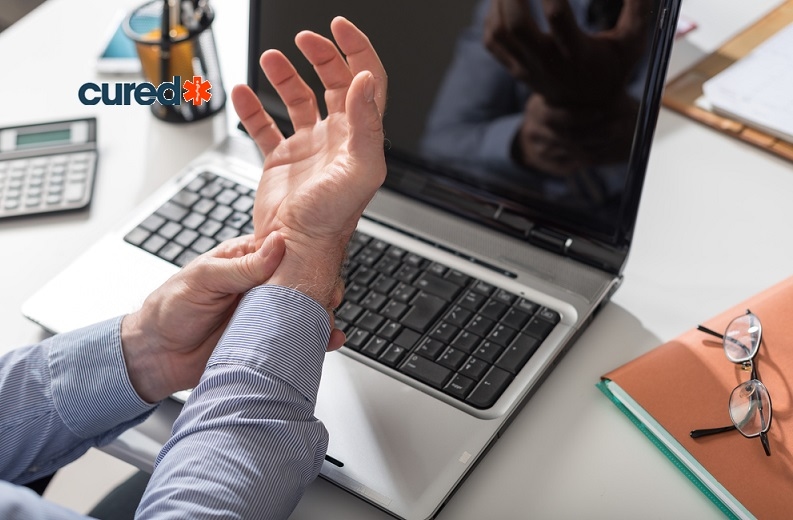 The computer age has brought about the recognition of this disorder in the workplace, with long hours at keyboarding without a supporting structure under the wrists as a prime cause. Medical professionals see this disorder as a diseased condition of the nervous system. The carpal tunnel is a narrow passageway through the wrist bones, approximately as wide as the thumb, and contains many nerves and ligaments. Flexing the wrist causes pressure to these ligaments and nerves, resulting in numbness, tingling, pain, and a cold or hot sensation. It is safe to say that long-term, unnatural flexing of the wrist is one of the leading causes of carpal tunnel syndrome. First mentioned in the mid-19th century, carpal tunnel syndrome became common in the years following World War II. The use of wrist splints to alleviate symptoms caused by wrist flexing during sleep is encouraged. Some modern theories lead to an occupational or ergonomic approach. Some cite repetitive tasks and posture as causes of carpal tunnel syndrome.

Other causes of carpal tunnel syndrome may include rheumatoid arthritis, fluid retention in tissues caused by disease, trauma, tumors, and obesity. A physician may test for this disorder by gently flexing the patient's wrist and waiting to see if symptoms occur. If the patient describes numbness in the fingers, wrist, and hand, it usually confirms medial nerve compression. Some patients find relief with injections of cortisone. Surgery to relieve pressure on the nerves in the wrist may be necessary for patients with constant symptoms. Carpal Tunnel Syndrome affects 1 out of 20 people in the USA, with Caucasian women having the highest incidence.

The symptoms of this disease start slowly and then increase. Many people try to ignore the sensations given by the body related to this disorder. But that is not the right thing to do. The first thing that you will get is numbness or some kind of tingling. You may get this feeling in the fingers of the hand. The little finger is not affected by it. You might get a type of electric shock in these fingers. The sensation may go from the wrist up to the arm. The symptoms typically happen when a person is holding a newspaper, phone, or steering wheel. It may lead you to wake up from your sleep. There are a lot of people that shake out their hands to relieve themselves from the symptoms. But the feeling of numbness may keep increasing with time. You may also have some weakness in the hands, which may lead you to drop the objects you carry. This may cause weakness in the thumb's pinching muscles or numbness in the hand. These are also regulated by the median nerve.

Many studies have shown that there is a direct connection between this disorder and the excessive usage of computers. There is evidence that shows that it is the usage of the mouse and not the keyboard that causes the issue. But there has not been sufficient evidence in this regard to lending support to the theory that excessive computer usage is a major risk factor for carpal tunnel syndrome. But it may give you a different type of pain in the hands. Some other factors are associated with this disorder. They may not cause carpal tunnel syndrome directly. But they increase the risk of damage or irritation to the median nerve. One of them is the anatomic factors. Any arthritis, dislocation, or fracture in the wrists that deforms the small bones of that location can modify the space within the carpal tunnel and put more pressure than normal on the median nerve. Also, people with smaller carpal tunnels than others are more likely to have this disorder. That is why this disorder is usually more typical in females because of their smaller carpal tunnels than males.

A few chronic illnesses, such as diabetes, lead to a greater risk of nerve damage that can also cause damage to the median nerve. There is also a chance that being obese can cause this disorder. One of the other issues identified is changes in the body fluid. The fluid retention may lead to increased pressure within the carpal tunnel. This may irritate the median nerve. It is quite common during menopause and pregnancy. If it is caused due to pregnancy, it usually gets better on its own after the completion of the pregnancy.

There are no completely proven ways to prevent this disorder. But you will be able to reduce the stress on your wrists and hands using common methods. The first of these is to loosen your grip. Your work may involve a keyboard. Then you should try to hit the keys as softly as possible. If you are writing manually on paper. You should try using a big pen with free-flowing ink and a soft, oversized grip adapter. You should also attempt to take frequent and short breaks. Try to gently bend and stretch your wrists and hands a few times every day. Keep alternating your tasks when possible. This is vital if you use devices that vibrate or need to exert some amount of force. Spending a few minutes every hour can make a huge difference. You should not try to bend your wrist all the way down or up. Keeping the wrists in the middle position is the best. You should keep the keyboard at the height of the elbow or a little lower. You can also try to change your mouse. It should be comfortable for you and should not strain your wrists.

Carpal tunnel syndrome can be caused by putting the wrists in an unnatural position for long periods. Excessive computer usage has been identified as one of the causes. You should talk to your health care provider if you have any symptoms or signs of having this disorder. This can interfere with your usual sleep patterns and daily activities. There is also a chance that you may get permanent muscle and nerve damage without the right treatment.