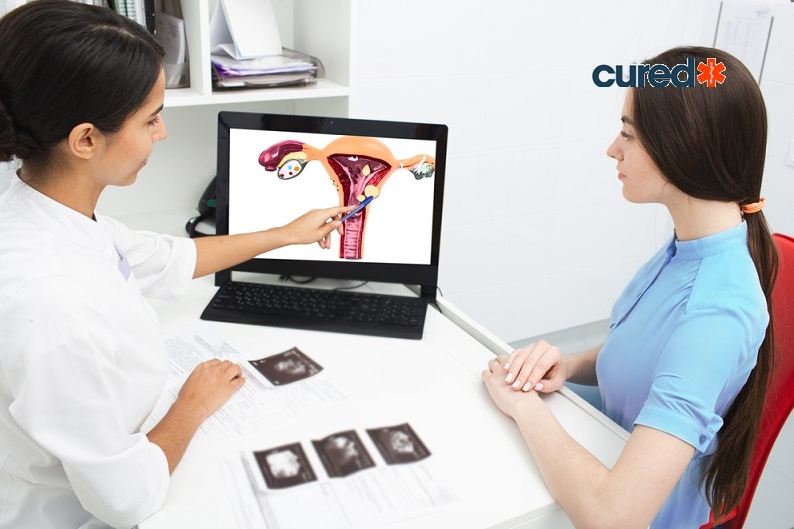 Fibroids are benign(non-cancerous) growths that form and grow inside of or in the immediately surrounding areas of a woman's uterus. In medical terms, a fibroid tumor is called a leiomyoma. Uterine muscle cells start to grow abnormally, forming uterine tumors as they grow. Fibroids are very common, with many women usually developing them at some point in their lives. Though many are harmless and tiny, they have the potential to go completely unnoticed.

It is not precisely known why women develop fibroids, but estrogen is crucial in making them grow. It is known that women who start menstruation earlier have a higher chance of developing fibroids, along with African-American women and women with a familial history of fibroids.

On the other hand, women with children and women on birth control pills were less likely to develop tumors.

Uterine fibroids can grow steadily, fluctuate in size, or even shrink over time. There are cases where fibroids spontaneously shrink, and there are others where they experience rapid growth.

After giving birth, the uterus often returns to its pre-pregnancy size, and many fibroids that were present before.

A fibroid's classification is determined by its position in the uterus. Fibroids are classified into three types:

Subserosal fibroids. They are the most prevalent form and develop on the uterine wall.

Submucosal fibroids: These develop in the uterine cavity.

Some fibroids can develop into pedunculated fibroids, which have a stalk that attaches to the uterus.

Many women don't have any symptoms from fibroids, but when they do, they may include heavy or prolonged menstrual periods, bloating or pain in the pelvic area, and constipation.

How are fibroids diagnosed?

Medium to large-sized fibroids are diagnosed with a manual examination by a physician or using imaging such as:

Ultrasound scans: Ultrasound images can be created by a doctor scanning across the abdomen or putting a tiny ultrasound probe into the vagina. Both of these methods can detect fibroids.

An MRI scan can be used to determine the size and quantity of fibroids.

Hysteroscopy is a procedure in which a doctor examines the inside of the uterus using a small device with a fixed camera attached to its end. The gadget will be inserted through the vagina and into the uterus via the cervix.

Laparoscopy: A doctor might also do a laparoscopy. A small, illuminated tube will be inserted into a small incision in the abdomen to inspect the uterus and its surrounding structures.

Occasionally a biopsy is done if there is a reason to believe the fibroid may be malignant.

Most fibroids do not require any treatment, but there are many various non-surgical methods to treat them, such as oral contraceptives, hormone treatments, and pain medications.

Surgical options are also available if the fibroids create serious problems. Some of the available options include myomectomy or hysterectomy. Another option for women who cannot tolerate invasive surgical procedures for health reasons is uterine artery embolization (UAE). This procedure cuts off the blood flow to the fibroid, causing it to shrink.

Bursting some myths related to fibroids

Do you know fibroids are the most common non-cancerous growth in the uterus? Did you know that these small tumors are not a disease but a natural part of being a woman?

Did you know that fibroids do not necessarily mean you will never be able to conceive or carry a child? If not, read on. Let's learn everything there is to know about fibroids, their impact on our lives, and how we can manage them.

How do fibroids affect our lives?

Fibroids affect the quality of life for up to 80% of women who get them. However, many women choose not to talk about fibroids because they feel ashamed, embarrassed, or as if they are alone in this battle. Yet, fibroids are very common. We all need to know about them because they can cause problems such as heavy bleeding, painful cramping, and difficulty getting pregnant.

- Fibroids can lead to irregular bleeding, which may be heavy or light. You might also have cramping during your periods. These symptoms can be disruptive and even interfere with your professional and personal life.

- While fibroids don't generally cause infertility, they can make it more challenging to get pregnant. How? They can put pressure on your uterus and cervix, blocking the path that the sperm need to get to the egg. Also, some fibroids are so big that they press against your bladder and rectum, which can cause pain and make intercourse difficult.

- Some women who have fibroids don't experience any symptoms. If you do have symptoms, they can include heavy bleeding, abdominal and pelvic pain, and pain during intercourse.

- Weight Loss: It has been found that overweight women are more likely to have fibroids than those who are average weight. Increasing your physical activity; reducing unhealthy foods can help.

- Getting Enough Sleep: Women who consistently sleep less than seven hours per night are more likely to develop fibroids for reasons that have not been fully explained. Maybe it might help to get some extra shut-eye.

- Reducing Stress: Researchers aren't sure if or how stress affects fibroids. But they know that women with fibroids who reduce stress have fewer fibroids and less pain than those who remain stressed.

Only being a woman of childbearing age increases your likelihood of developing uterine fibroids, but there are few other known risk factors. Some of the things that can influence fibroids form are:

Race. Even though any woman of childbearing age is at risk, black women are statistically more likely to develop fibroids than women of other races. Furthermore, black women tend to get fibroids at a younger age and have more fibroids, larger fibroids, and more severe symptoms.

Heredity. You run a higher risk of developing fibroids if your mother or sister had them.

Distinct elements are at play here. Having your first period at a young age, being overweight, lacking in vitamin D, eating a diet high in red meat and low in greens, fruits, and dairy, and consuming alcohol, especially beer, all seem to raise your risk of getting fibroids.

Fibroids cannot be avoided; however, some evidence suggests that confident lifestyle choices can lessen your risks.

According to one study, high-sugar diets may be associated with an increased risk in some women. Another study discovered that fresh fruits and cruciferous vegetables such as arugula, broccoli, cabbage, cauliflower, collard greens, and turnip greens might reduce your risk. Beta-carotene, folate, vitamins C, E, and K, and other minerals, are abundant in cruciferous vegetables. They're also high in fiber.

When should you see a doctor?

In case you experience any of the following symptoms, seek immediate medical assistance:

Fibroids are very common in women, especially after menopause, when the estrogen levels in the body decline. They affect the quality of life for up to 80% of women who get them. We all need to know about them because they can cause problems such as heavy bleeding, painful cramping, and difficulty getting pregnant. Hopefully, Cured.com have demystified everything about these small but mighty fibroids, and you are more informed about them now. This article is written with the sincere hope that you may come to see fibroids as a natural process of being a woman rather than an illness.