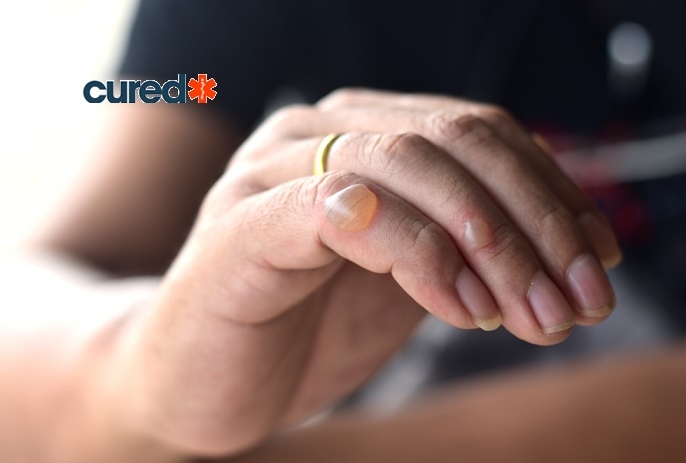 Blisters are raised portions of skin filled with fluid, also referred to as vesicles by medical professionals. The blisters you get when you wear ill-fitting shoes for too long affect your skin negatively. By separating layers of skin and filling them with fluid, this common cause of blistering produces vesicles. The pain, discomfort, and irritation associated with blisters are common. Generally speaking, they aren't severe medical problems and will heal themselves without medical intervention. A medical professional should be consulted if you ever experience unexplained blistering.

Blisters can develop as a result of a variety of activities and illnesses. Blisters can be formed in the following ways.

Blisters are more likely to form in a warm environment, such as inside a shoe. The formation is also more readily evident in damp environments than in wet or dry locations. Even though blisters may result in infection and ulceration, they are rare under normal circumstances.

Depending on when blisters form, burns can be classified. The blisters appear immediately after an incident of second-degree burns, but the blisters appear after a few days after an incident of first-degree burns. Blisters are also caused by frostbite, the opposite of the situation. Blisters are defense mechanisms deployed to prevent damage to lower levels of skin from high temperatures.

A ruptured cross-section of a small blood vessel can cause blood to leak into the gap between the layers of skin, resulting in a blood blister.

Conditions that affect the body

The cause of blisters can vary from one medical condition to another. The following are some examples:

Blisters can be classified into the following types:

There are other types of blisters named after the conditions they are associated with, such as irritation caused by chickenpox, shingles, and affliction caused by atopic eczema.

Many individuals experience friction blisters as their most common type. As a result of increased stress between the skin surface and whole body, they appear in the form of scars that most commonly occur. Shear forces are most likely to cause damage to the stratum spinosum layer of the skin. The cells within this layer begin to leak plasma-like fluid and fill the gap where it tears away from the tissues below. A fluid like this encourages the regeneration of new cells.

Cells within the blister base start taking up amino acids and nucleosides around six hours after the blister appears. Proteins and DNA are made up of these building blocks. There is a marked increase in cell division at 24 hours. The stratum spinosum is gradually forming new layers of skin. The upper layer of skin appears after 48 hours, while the lower layer is visible after 120 hours.

Upon developing these new cells, the swelling subsides as the fluid is absorbed. When the skin's deep layers are sheared, blisters on the palms or soles of the feet can be very painful. Those layers are located near nerve endings, which causes more pain to be felt.

Medical intervention is rarely required for blisters to heal. During the healing process under the blister, the fluid will slowly evaporate, and the skin will start to peel off as the new skin grows underneath.

You should also let blood blisters heal at their own pace under the same conditions. An ice pack can provide some relief from these blisters, as they can be more painful than standard blisters. Make sure not to directly contact the skin with the ice pack by placing a towel over the affected area.

Getting rid of the cause of friction is the best way to prevent friction blisters. There are a number of ways in which this can be accomplished.

Avoiding blisters on the feet

Keep your footwear well-fitted and comfortable, as well as your socks clean. It is more likely that blisters will occur when you wear outsoles for shoes that are not properly fitted. Blisters are more likely to form on moist skin, so socks that manage moisture or socks that need to be changed frequently can be beneficial.

It is possible to reduce the amount of sweat available for the feet during exercise and sports by wearing specially designed socks. Before going on a long trek, it is important to thoroughly break in your hiking or walking boots.

When blisters appear on trouble spots, you can avoid them by applying tape, padding, or moleskin. It is possible to purchase these products online. The inside of shoes can also be managed with friction-management patches. Many socks or insoles won't need to be changed, as these will stay in place for a longer period of time.

Avoiding blisters on the hands

In most cases, gloves will prevent blisters from occurring when using tools, performing manual work, or playing sports requiring bats.

It is common practice to tape up the hands in some sports, from gymnastics to weightlifting to rowing. Moreover, as well as reduce friction, talcum powder can be used alongside gloves and tape or alone. Despite this, talcum powder does not work well for long periods of time since it absorbs moisture.

It usually takes only a few days for blisters to heal naturally. During the healing process, bandage your blister and wear a different pair of shoes. A healthcare provider should be consulted if you have blisters caused by burns or frostbite. Blisters that do not improve after a few days should be seen by a healthcare provider. Moreover, if the blister appears infected, you should see a healthcare provider as soon as possible. An infected area will be red and swollen if it has been infected. In contrast to blood or clear fluid, blisters are filled with white or yellowish fluid.