How Should You Go About Strength Training? 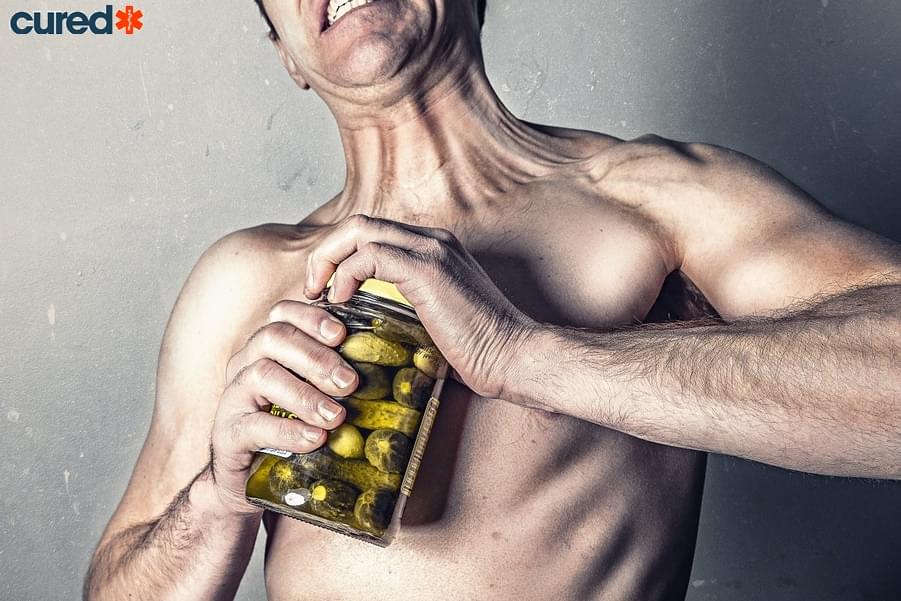 Strength training is a form of exercise whose purpose is to develop a person's muscles via some form of resistance technique, whether by use of the machine, body weight, or free weights. Strength training is an anaerobic activity (i.e., energy is generated directly from a body's muscle metabolism), rather than aerobic (energy is generated from oxygen intake). For example, doing continuous exercises in 'circuit training' with very little rest draws energy mostly from aerobic energy sources. Short heavy-duty exercises, with rest breaks, are fuelled by anaerobic energy sources, by the breakdown of phosphagens or glucose within the muscle.

What are Differences in Strength Training?

Strength training is not a sport, but rather a form of exercise which some sports, such as weightlifting or bodybuilding, incorporate as a core regimen. Many other sports also use strength training, some to more of an extent than others. For example, the track and field events of discus and shot-put require a great deal of strength training, while most team sports, including basketball, rugby, football, soccer, lacrosse, and hockey, though making use of strength training, do not make it the sole focus of that sport's training.

The long-term benefits of strength training are greater muscle strength; improved muscle appearance and tone; increased endurance; greater bone density; and improvement in cardiovascular fitness. Though long-term metabolic effects are still under dispute, in the short-term, strength training does improve a person's short-term basal metabolic rate for at least several hours. Muscle mass does definitely increase, with a corresponding drop in fat accumulation. Further beneficial side effects of strength training, just as with any intense exercise, are the increase in body levels of serotonin, dopamine, and norepinephrine, all of which are natural substances that counter depression and improve mood.

Functionally, stronger muscles provide much better support for joints, improve posture, and reduce the risk of severe injury from everyday mishaps. Elderly people who start strength training lose less muscle tissue, and, therefore are less frail. Strength training also helps muscles weakened by an acquired disability, such as a stroke, or those muscles recovering from an injury or surgery.

Strength training comes in two types: weight and resistance. Weight training uses gravity and heavy objects; resistance training uses elasticity. Both use a counterforce to oppose the contraction of a muscle. The main difference between the two is that most of the counterforce for weight training is generated at the start of the movement to overcome inertia), while the counterforce for resistance training is at its greatest at the end of the movement. It is possible to turn a weight lift into a resistance movement by starting slowly and moving slowly throughout the lift. Resistance training can be further subdivided into isometric and isotonic training. An isotonic exercise involves moving the body against a force; an isometric exercise involves holding the body still against a force. Isotonic exercises strengthen the entire muscle throughout the entire movement; isometric exercises strengthen the muscle at and around the focus point of the force.

Before moving forward, some of the terms that are part of strength training need defining. An exercise is a specific pattern of movement for the body that challenges muscles in a specific way. The form is a definition of the movement designed for an exercise that maximizes both safety and gains in muscle strength. Rep is short for 'repetition.' One rep is either one cycle of controlled lifting and lowering of a weight or one movement in the form of an exercise. A set is a series of reps done one after another without any break. Rep Max or RM defines the maximum reps to be done on a set for a specific weight or resistance level. For example, if 12 reps are to be done for a weight of sixty pounds, then the RM would be 12. An RM of 1 means that only one rep should be done before taking a break; for example, an RM of 1 would likely be appropriate for a 200-pound weight. Tempo is the speed at which an exercise is to be done, on a range from quickly to slowly.

A set of 1-5 reps will develop muscle size and strength but will not develop much endurance. A set of 6-12 reps will balance development for muscle size, strength, and endurance. A set of 13-20 reps will develop endurance, with only slight improvements in muscle size and strength. Sets beyond 20 reps move into the area of aerobic exercise. An exercise session for an individual will usually be one to six sets for an exercise, for one to three different exercises. Breaks are taken between sets, and when shifting to a different exercise. The length of these breaks depends on the endurance of the individual. Generally speaking, breaks should be taken when the exercise shifts to aerobic rather than anaerobic.

Nutrition is one of the major concerns to address when starting a program of strength training. More protein is needed to build muscle. Trainers and nutritionists recommend a diet with 0.6-1.5 grams of protein per pound of body weight, which is equivalent to 1.4-3.3 grams per kilogram of body weight daily. An individual should eat a balanced, light meal one to two hours before a strength training exercise session. Drinking water throughout the exercise session is very important.

A protein shake should be consumed immediately after the exercise session as a recovery drink-- in addition to a protein, such as whey, with tripeptides and dipeptides, the drink should also contain leucine as well as glucose or dextrose. Some trainers recommend additional products, such as steroids or creatine to promote muscle growth, but the effectiveness and safety of these products are still disputed.