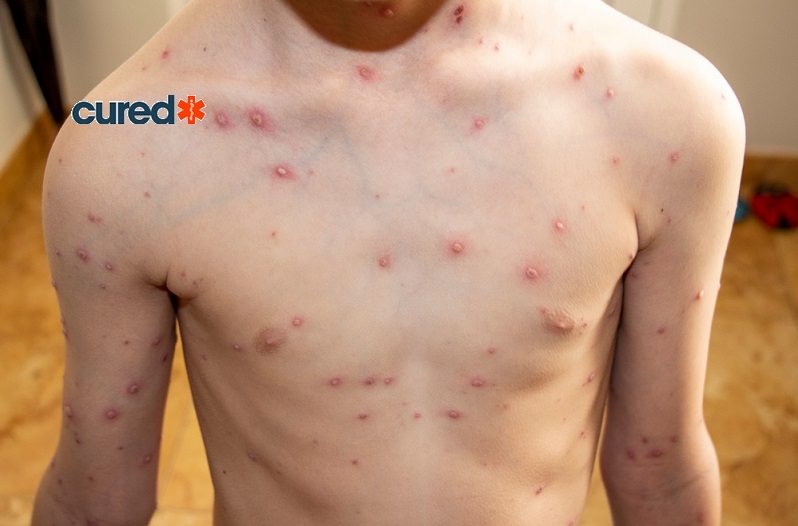 Chickenpox is caused by the varicella-zoster virus. Chickenpox is a very common illness, especially among children, and can usually be prevented by getting a vaccine early, between 1 and 2 years of age. It is also recommended that children ages 4 to 6 get a booster shot for further protection. Symptoms include a rash of itchy spots that spread everywhere on the body, such as the face, abdomen, and genitals. This is also accompanied by flu-like symptoms. Because the virus is contagious, the infected individual is recommended to stay home until the symptoms go away.

Usually, chickenpox only occurs once in a person’s lifetime. Still, VZV can be dormant in the body and appear later in life, causing shingles. A chickenpox vaccine severely lowers the chances of developing shingles later in life. People with shingles spread chicken pox to an individual, but there is no risk of catching shingles. Shingles occur from the reoccurrence of the virus. Since a virus causes chickenpox, antibiotics will not be prescribed unless the sores become infected with bacteria.

Usually, scratching and picking at blisters will cause this. To provide relief from the discomfort of chickenpox, there are many remedies out there to try.

Calamine lotion is good to put on the very itchy areas of the body but keep away from the face. Oatmeal bath products can be bought at supermarkets and pharmaceuticals stores. Chickenpox can make eating uncomfortable, so avoid hot and acidic food, but eat cold, soft, and bland food for comfort. Always ask your doctor or pharmacist about creams to apply to sores in the genital area. Most chickenpox infections require no special medical treatment, but if problems such as a high fever lasting for excessive days or trouble walking or breathing, call your doctor.

The disease causes a blister rash that appears nearly two weeks after exposure to the virus. It lasts for about a week or a little more than that. The symptoms may appear a couple of days before the rash. They include tiredness and feeling unwell, headaches, loss of appetite, and fever. After the rash appears due to chicken pox, it goes through various phases. The first one is the red bumps or the raised pink papules. They break out over a few days. It is followed by small fluid-filled vesicles or blisters. They form in about a single day and then start breaking and leaking. The final phases are the scabs and crusts. They cover the broken blisters and take many more days to heal completely. Their new bumps keep coming over the next few days. So, you may be one of the people that get all the phases of the rash. This includes cabbed lesions, blisters, and bumps at the same time. You can also spread the infection to other individuals for nearly a couple of days before the rash appears completely.

The virus is contagious until all the blisters have crusted over. The disease does not get too overbearing in healthy children. In cases where the virus greatly affects the rash, it can spread over the entire body. There may be lesions in the eyes, throat, and the mucous membranes of the vagina, anus, and urethra.

When to See a Doctor Regarding Chicken Pox

You may think that you or any family member may have this disease. Then you should immediately consult your healthcare provider. They can typically diagnose this disease by looking at the rash and learning about the other symptoms. The healthcare provider can also give the right medications to reduce the severity of chickenpox and treat the complications that have arisen. To avoid infecting other people around you in the waiting room, you can call ahead for an appointment and also mention that you think that you or your kid may have contracted chicken pox. You should also let your healthcare provider know if the rash goes to both or one of the eyes. They need to know if the rash is getting very tender, warm, or red. This could mean that there is a secondary bacterial skin infection. The rash can also be accompanied by a high fever, stiff neck, vomiting, worsening cough, loss of coordination in the muscles, tremors, shortness of breath, swift heartbeat, disorientation, and dizziness. You should also tell your healthcare provider if any member in your house has a problem with their immune system or are younger than half a year.

Chicken Pox and Other Conditions

Any abnormalities in the limbs and low weight at birth are more common among babies born to females infected with the disease early in their pregnancy. When any mother is infected with the disease in the week before giving birth or within some days after giving birth, the baby has a greater risk of getting a life-threatening and serious infection. You may be one of the people who are pregnant and not immune to chicken pox. Then you should talk to your healthcare provider about the risks present to your unborn child and you. You may have had chicken pox before. Then, you may also be at risk for a complication known as shingles. A virus called varicella-zoster remains in the nerve cells after the infection of the skin has healed. The virus can reactivate after a long time and come back as shingles. This is a cluster of short-lived blisters that are quite painful. The virus is more likely to come back in adults that are a little aged and people who have a weak immune system. The pain of having this disease can last for a long time after it has disappeared. This is known as postherpetic neuralgia, and it can be quite severe. The vaccine for shingles is recommended for people who have already had chicken pox in the past.

Many guardians wonder whether the vaccines present in the market will be effective and safe to apply to their wards to save them from this disease and other diseases. Since the vaccine for chicken pox has become available on the market, studies have found it quite effective and safe. Some side effects include swelling, soreness, and redness. Sometimes, there may be small bumps at the site where the shot was administered.